So, I told you last week that we were heading out for a short weekend vacation, right? Wow, just wow! Hotwire.com came through for us again! Bentley’s Boutique Hotel was awesome! My only, ONLY, complaint, was that it wasn’t too close to the places we were planning on visiting, but it’s hard to fault them for that, since that was our choice. The hotel is right on the main road, but once you step through the front doors, you wouldn’t even notice. The staff was very welcoming, rooms were clean and very nice, and the pool and tiki bar area were great. I wish we’d had more time to just relax at the hotel and enjoy all it had to offer. They even had a kids area in the lobby, with a little table and chairs, and a bead toy to play with. I wish I’d gotten pictures of the lobby and restaurant too, but here are a couple pictures of the room anyways. 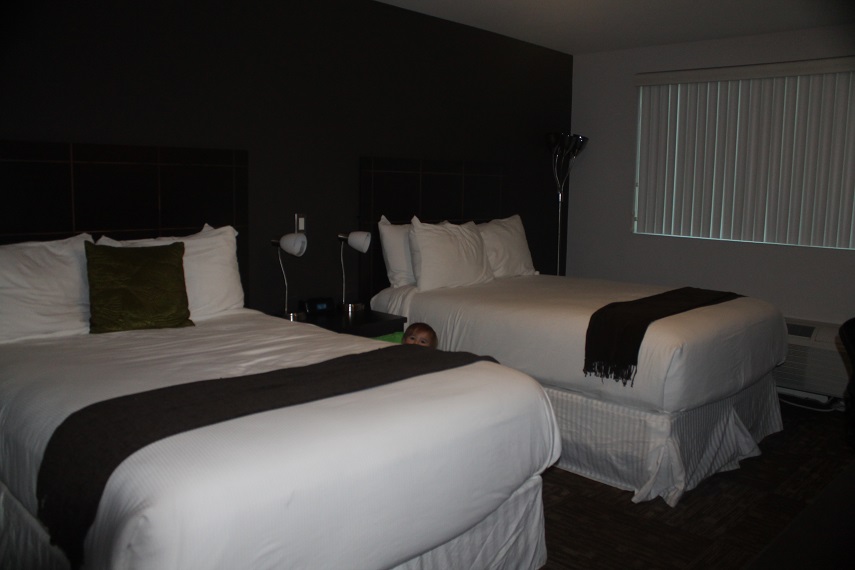 Don’t mind the little photo bomber! He was excited to start exploring the room!

We relaxed in the room the first morning, and headed out, after an early naptime, to see the area. The main reason we’d chosen this area was because Hubby wanted to eat at The Old Salty Dog restaurant, since it had been featured on Man vs. Food. The restaurant was easy to get to, and was in a beautiful location, right on the water. I loved the fact that it was open-air, and the weather was amazing, so we were never too hot. One of the coolest things I learned about the restaurant is that they allow dogs, so there were a few dogs hanging out with their owners when we got there. Hubby ordered their famous Salty Dog, which is basically a deep fried hot dog, and I got the grouper nuggets, because I am a sucker for grouper! The grouper was really good, but I think next time I will get the sandwich instead. It was just a little too much fried food for me. The Salty Dog on the other hand… Now you wouldn’t think a deep fried hot dog would be great, but you would be 100% wrong! I only had a little bite, and I doubt I could eat even half of it, because of the size, and the fact that it is deep fried, but it sure was yummy! Hubby enjoyed it too, and said next time he might try the fully loaded version!

After lunch, we walked across the street to MOTE Marine Aquarium. We were really excited to visit, because in addition to being an aquarium, it is actually a working research laboratory too. The outside isn’t as fancy as some of the for-profit aquariums, but I still think the visit was well worth the price! The staff is very knowledgable, and very willing to answer questions and share facts and tidbits with visitors. We spent quite a bit of time talking with the man at the manatee exhibit. He told us all about the history of the two manatees and the blind turtle in that tank. 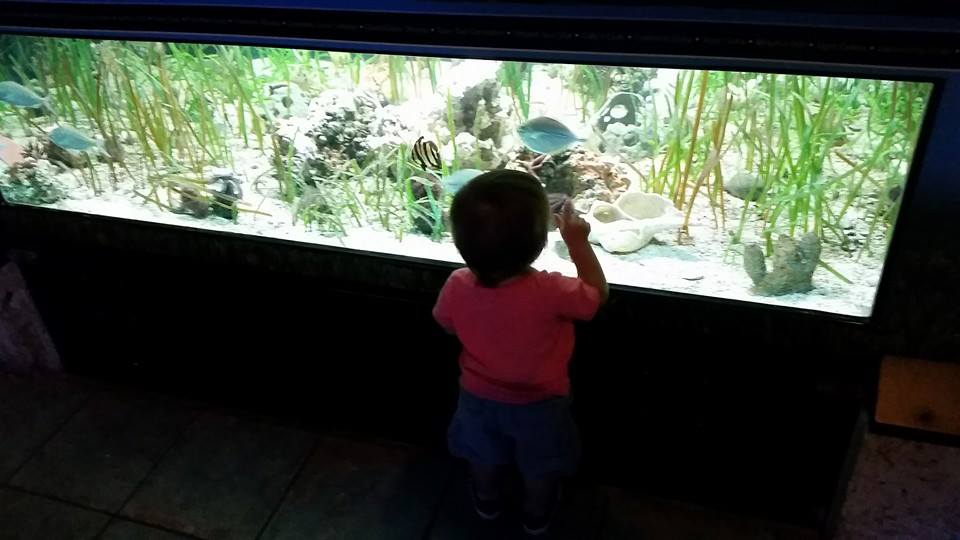 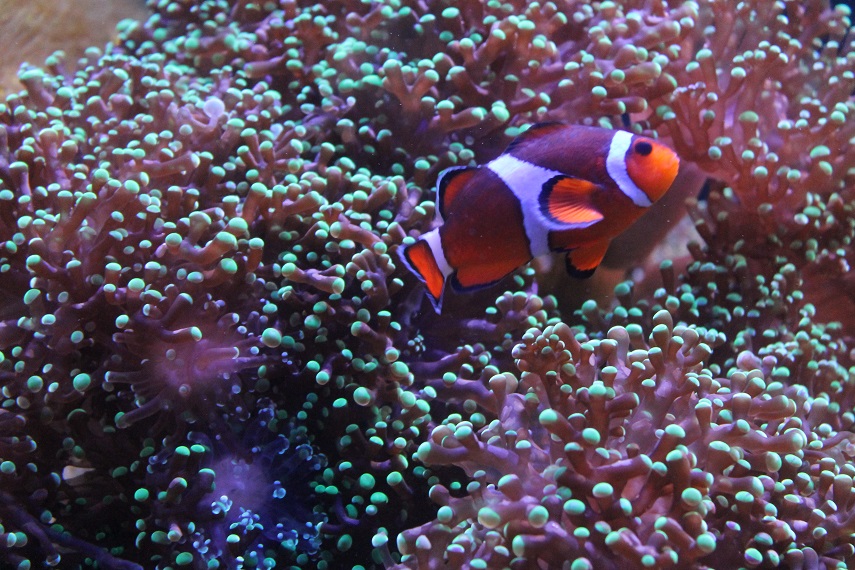 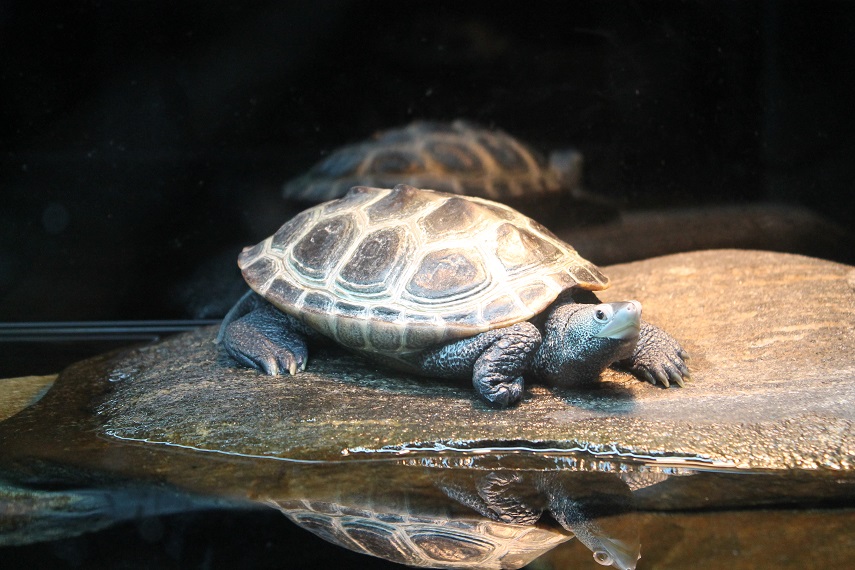 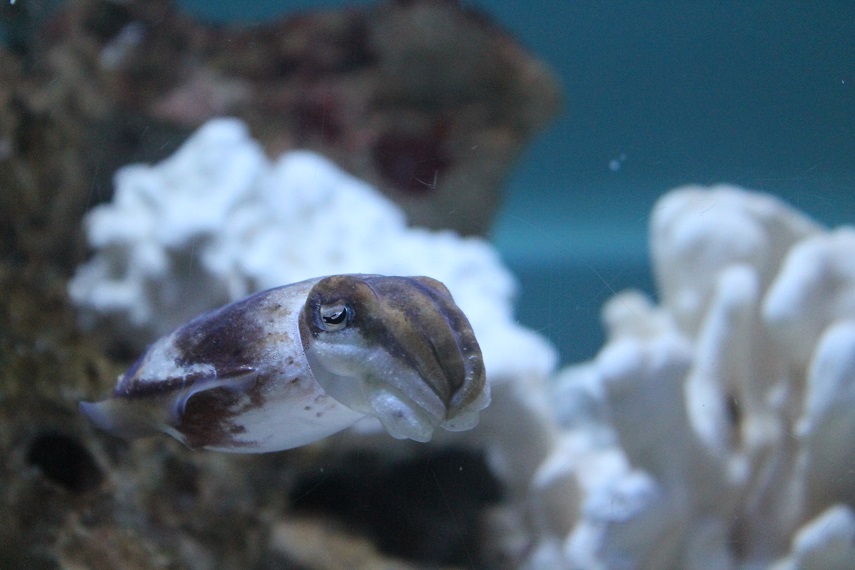 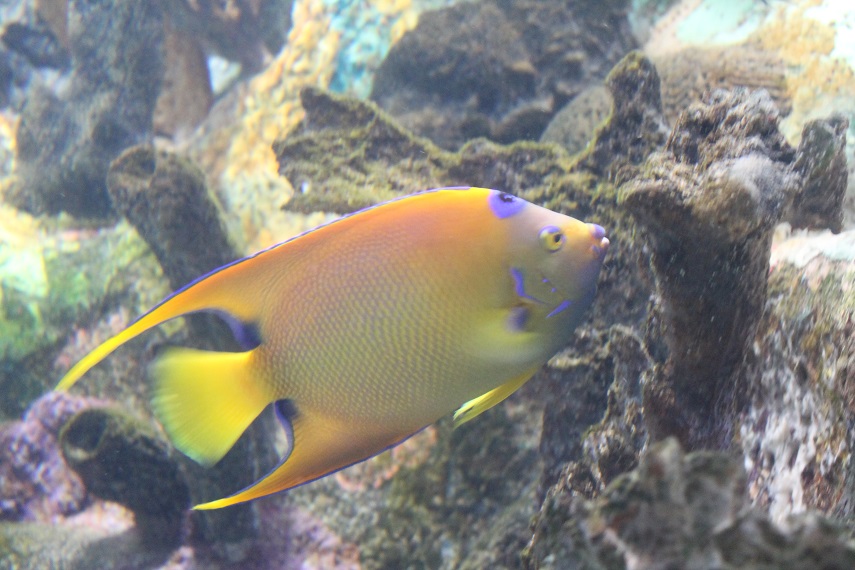 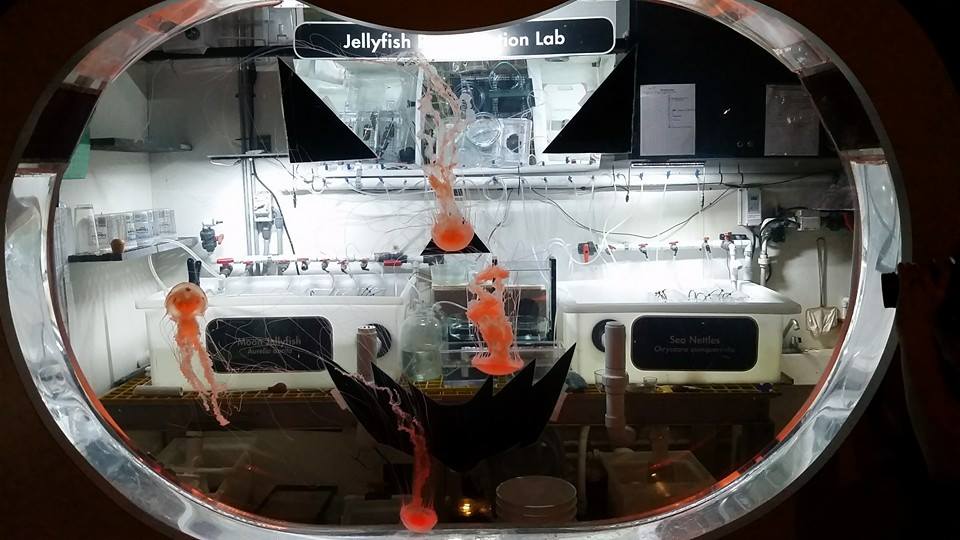 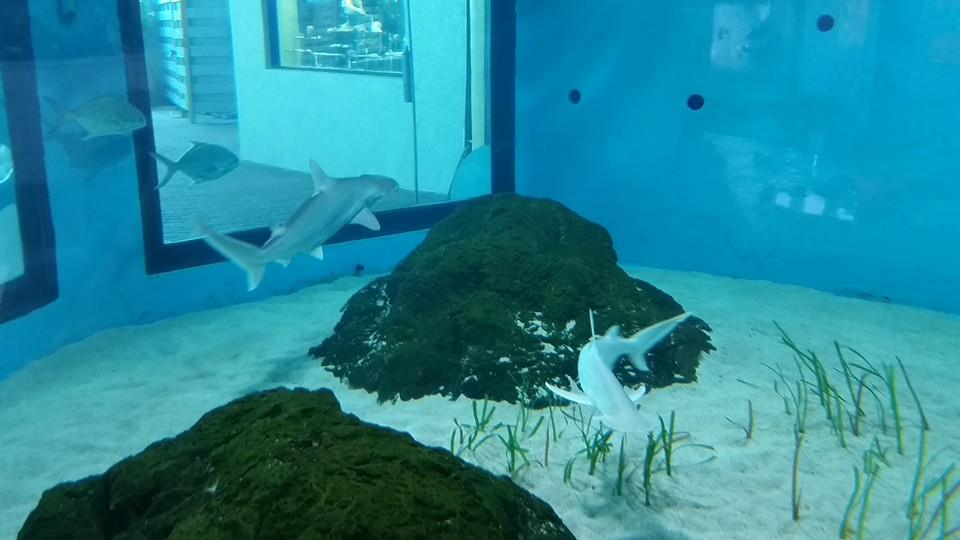 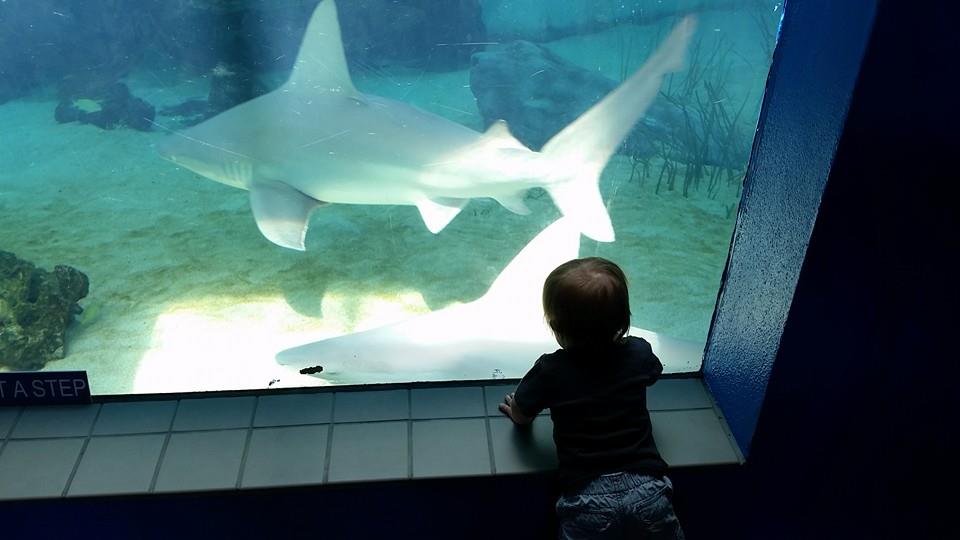 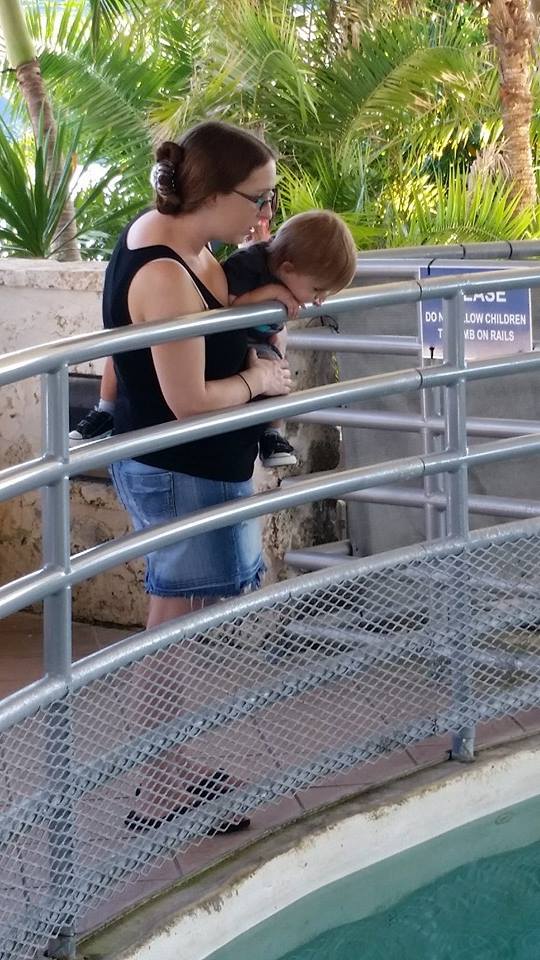 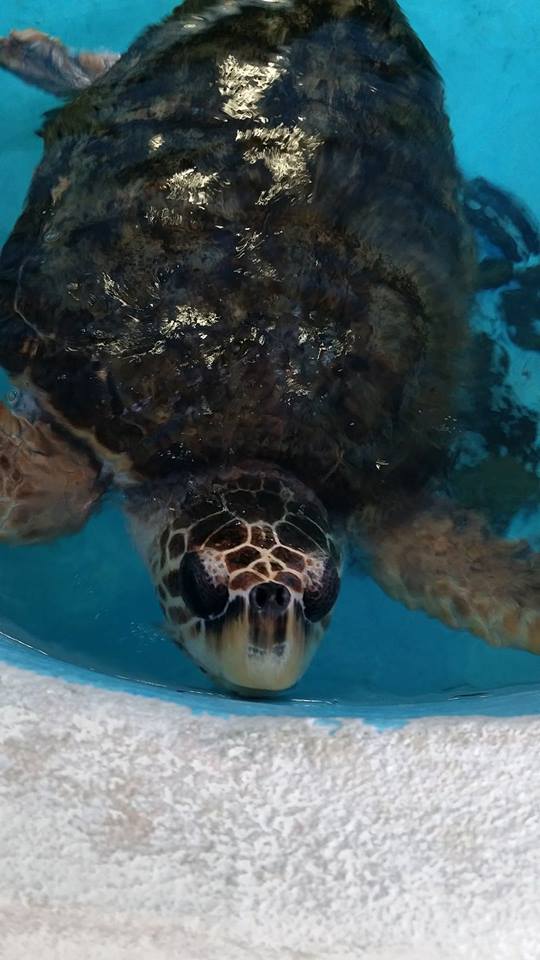 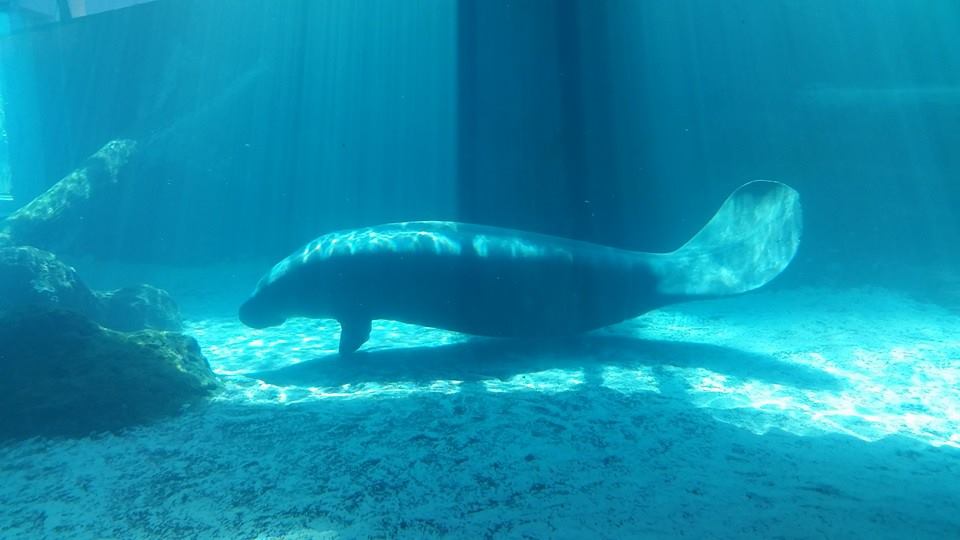 We loved the Aquarium so much that we actually stayed until closing time! On our way back, we stopped and got Ben & Jerry’s, because really, how can you pass up a Ben & Jerry’s stand-alone store when you see one?? We couldn’t! I don’t even remember what flavor I got, but it was chocolate hazelnet something, and it was A-MA-ZING! Hubby was thrilled that they had Cotton Candy flavored ice cream (his favorite), so of course that’s what he got! I think Little G enjoyed the hazelnut ice cream too. What do you think?? 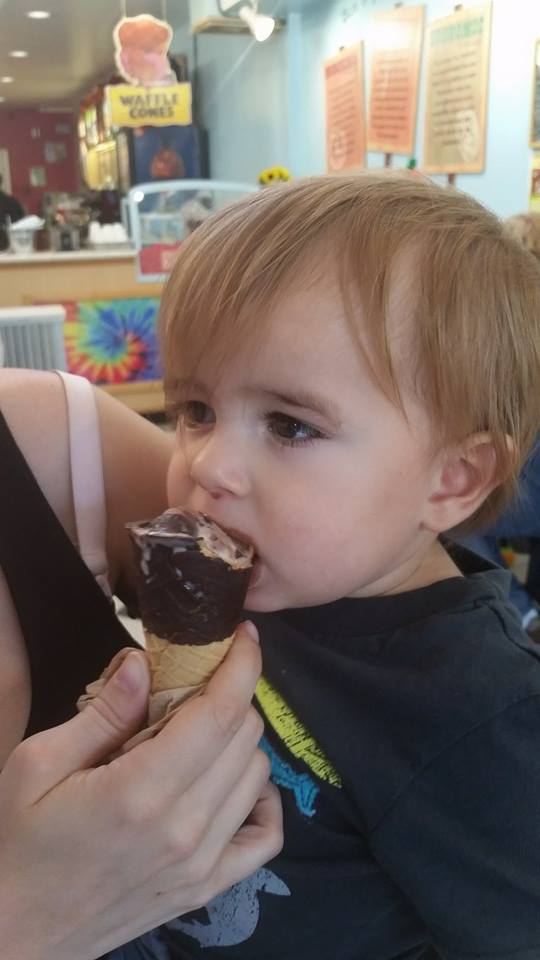 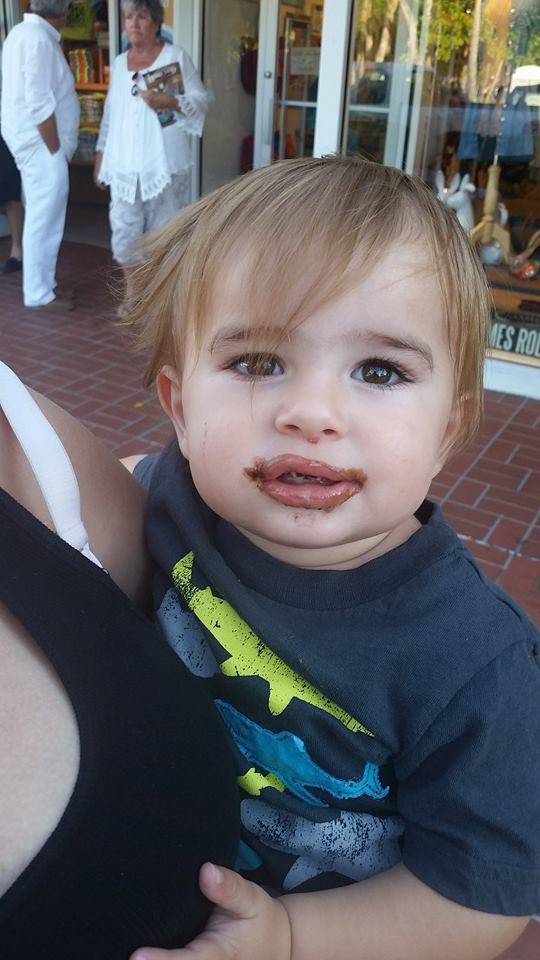 Then, it was back to the hotel for a nice, quiet dinner at the hotel’s restaurant, Morgan’s. We were hesitant to eat here because the prices were a bit high for our budget, but we really wanted a relaxed dinner, and it was just too convenient to pass up. I am so glad we took the chance, because the food was excellent, and the portions were huge! Again, I found myself wishing we were staying longer, because we each could’ve made a second meal out of our dinners. I had the Chicken Caesar salad, and Hubby had a Turkey Club Sandwich. I really wish we’d gotten pictures of our food, so I could share with you.

The next morning we headed out of town, but not before spending entirely too much money at the Tervis outlet. I thought I’d died and gone to Heaven! Let me just tell you, I am quickly becoming a Tervis fanatic! My stepmom bought me some a couple years ago, and I’ve bought myself a few sports tumblers, but this store had EVERYTHING! Any sports team you could wish for, tons of cartoon characters, different hobbies, and other pretty patterned designs. They also had some holiday themed tumblers, including a Dia de los Muertos cup, which I just had to have. Hubby got an Anaheim Ducks cup, because he has such a hard time finding Ducks memorabilia in Florida. He also got a clearance FSU State Champions cup, Little G got a Mickey cup (his first Tervis, with a straw, which he decided he wanted to pull out of the cup instead of using it to drink), and several gifts. Little G was a little fussy while we were there, so the sweet lady at the register gave him a little stuffed Tervis doll. Here is a picture of all our wonderful souvenirs from our trip. 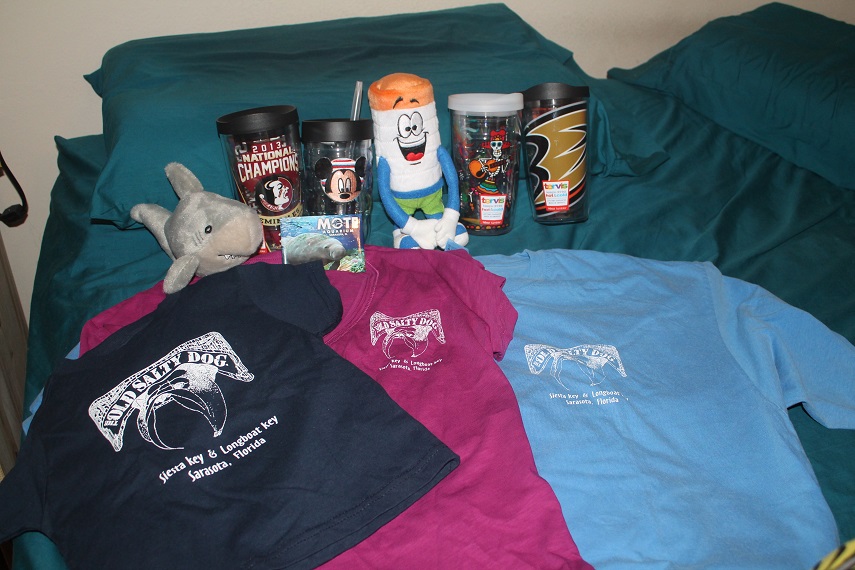 We also stopped at the mall on the way out of town, to grab some lunch. While we were there, we discovered their Family Lounge (have I ever mentioned how much I love Westfield for making Family Lounges??) and snapped this cute picture of Little G. All in all, we had a wonderful trip, and we will definitely be going back again! 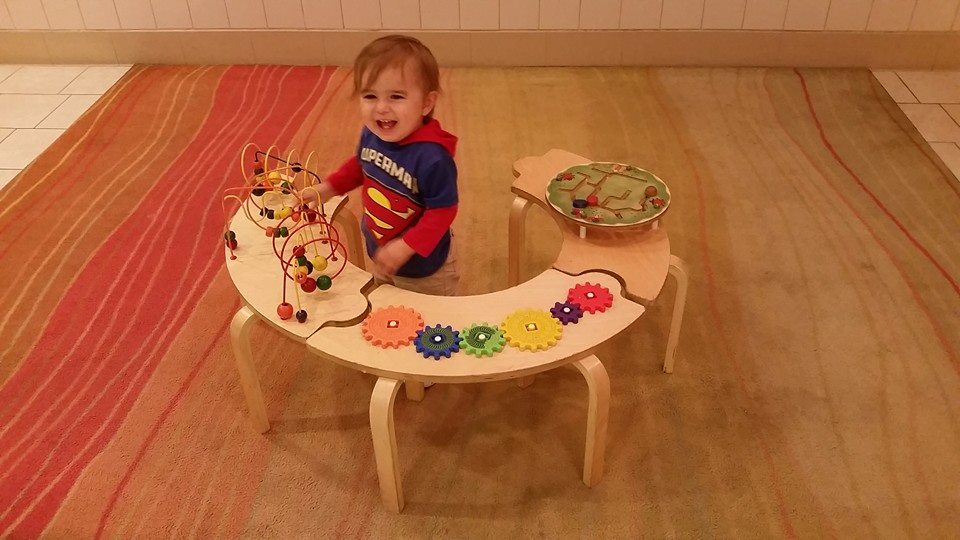