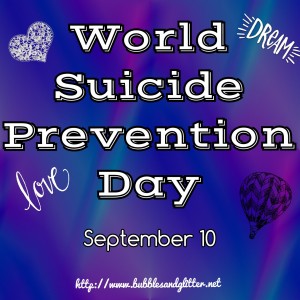 I’ve attempted to write this post several times over the past several days, but haven’t

been able to finish. This subject is close to my heart, which makes it harder to put things into words. This is something I haven’t shared with many people, but, especially this week, I think it is something that needs to be shared. If I can help save even one person, then it is worth the uncomfortableness that I am feeling now.

When I was 14, my mom passed away from brain cancer. My dad did the best he could to help my sister and I deal with our mom’s death. He gave us the option of backing out of camp that year (she passed away 2 weeks before camp began, we chose to go anyways). He sent us to see a therapist (we asked him to discontinue therapy, he did). He took care of us, amidst his grief of losing the woman he had loved since he was 12 years old, put food on the table, involved us in school activities, drove us to school every morning, attended our soccer games, school plays, spent time with our mom’s family, etc.

Despite all this love that I was getting, I started to sink into a very dark place. I became depressed, though I didn’t really understand what that meant (I’m only now, 20 years later, beginning to understand it). But I was really good at putting on a smile and pretending that I was ok. But I wasn’t. At such a small school, it wasn’t easy to find people who related to what I’d been through, so I turned inward instead. I spent more time alone, and took out my anger about my mom’s death, on my dad. I became so angry with him that thoughts of running away consumed me. I even wrote “runaway” letter, and hid them under my bed.

As time went on, I began thinking more and more about death, and eventually starting wishing for it. I started wishing that I had been the one to die, because at least then my mom would’ve been there to take care of my little sister. I thought how cruel it was for God to take our mother away, from two little girls who needed her so much, instead of just taking me away when I was so unhappy with life anyways. I didn’t want to live in a world where my mom wasn’t. I started thinking about what it would be like to take my own life, and how I would do it. I weighed the pros and cons of different methods, which would hurt most, which would be quickest, which would be easiest. But I thank God that my parents had instilled such a strong sense of love for my family in me. I can honestly say that saved my life. The only reason that I never attempted suicide was because I couldn’t bear the thought of making my sister and my dad go through another loss. Because I knew what it felt like to lose someone you loved so dearly. And I knew my dad and my sister loved me. I couldn’t imagine how much worse it would be to go through a second loss, and this one self-inflicted. I couldn’t do that to them. No matter how mad I got at my dad, I still loved him, and I loved my sister, and I knew that she was just an innocent child in all of this. She needed me more than ever at that time in her life, and would as she grew up, and I had to be there for her since my mom wasn’t. I knew it was what my mom would’ve wanted.

As I’ve gotten older, I still struggle with feeling depressed at times. Sometimes it comes on because of a rough time in my life, but sometimes it just randomly hits me when everything is going well. But as I’ve learned more about depression, and as I’ve built a life I love, I’ve found more reasons to live. I still live for my sister and my dad, but along the way I have added friends and family, and most importantly my husband and son, to live for too. I live for those who want so desperately to live, but can’t. I live for those who’ve lost loved ones to suicide, or to death. I live, to give others who struggle with depression and suicide the knowledge that they are not alone. YOU ARE NOT ALONE, and you are so very loved, even by people who have never met you! If you struggle with depression, there is help and there is hope. If you need someone to talk to, I am here for you. Just drop me a comment. Or go to www.twloha.com for additional help. They can connect you to the organizations that will help you with your specific struggle, be it depression, addiction, suicide, self-injury, etc.

This is not the blog post I had originally intended to write for World Suicide Prevention Day. I really just planned on telling you statistics and ways to help (which you can still find at the end of this post), but as I started writing, I realized there are so many websites out there with this kind of info, but there is nowhere else that you can learn about this specific story. And while there are other stories like mine, everyone relates to different stories for different reasons, and maybe there is that one person out there who will relate specifically to mine. If I can help even one person, I have done something positive by bearing my soul to you.

According to the American Foundation for Suicide Prevention, “In 2013 (the most recent year for which full data are available), 41,149 suicides were reported, making suicide the 10th leading cause of death for Americans. In that year, someone in the country died by suicide every 12.8 minutes.” The 10th leading cause of death!! The TENTH! I’m sorry, but that is HUGE. In the time it took you to read this blog post, at least 1 person took their own life. But, there are ways that you can help.

According to WebMD, “Warning signs that someone may be thinking about or planning to commit suicide include:

Be especially concerned if a person is exhibiting any of these warning signs and has attempted suicide in the past. According to the American Foundation for Suicide Prevention, between 20% and 50% of people who commit suicide have had a previous attempt.”

If someone you know is exhibiting these behaviors and warning signs, there are ways that you can help. You can be there for them. You can refuse to leave their side. But please, don’t for a single second think that it can’t happen to you, that your friend wouldn’t do that to themselves, or to those they love. When you are depressed, you don’t think clearly or rationally, you don’t consider the implications of your actions, and someone you love very well could attempt to take their life. Please do not hesitate to call 800-SUICIDE (800-784-2433) or 800-273-TALK (800-273-8255) or the deaf hotline at 800-799-4889. Doing so could save their life!!